SAMGYEOSAL/ 삼겹살
ACCOMPANIMENTS
The most common accompaniments for "SAMGYEOSAL" are lettuce (sangchu; Korean) and sliced raw garlic, but very often the meat is served with other accompaniments, such as perilla leaves (kkaennip; Korean), sliced green chili peppers, shredded green onions, sliced raw onions, and aged kimchi. Garlic, onions, and kimchi can be either grilled with the meat or consumed raw with the cooked meat. Mushrooms, such as button mushrooms or oyster mushrooms, are also grilled with the meat.

DIPPING SAUCE
"SAMGYEOSAL" is almost always served with at least two kinds of dipping sauces. One is ssamjang, a paste consisting of chili paste (gochujang; Korean), soybean paste (doenjang; Korean), sesame oil, and other ingredients; the other is gireumjang, made with salt and sesame oil, sometimes also with a small amount of black pepper. Usually ssamjang is used when a diner eats "SAMGYEOSAL" with vegetable accompaniments, and gireumjang when a diner wants to taste the cooked meat itself.

CONSUMPTION
Prior to consumption, the large slice of the pork belly is cut into smaller pieces with scissors. A common way to consume "SAMGYEOSAL" is to place a slice of the cooked meat on a leaf of lettuce or a perilla leaf or both, with some cooked rice and ssamjang, and to roll it up in the leaf and eat it. It is usually called sangchu-ssam. Cooked rice and other foods wrapped in Korean lettuce can also be called sangchu-ssam. Any combination of the vegetable accompaniments mentioned above can be added to the roll according to preference, the most popular is sliced garlic. Many people also add in kimchi, mushrooms, bean sprouts, and grilled onions. Usually, different types of banchan are added. Part of the reason so many people enjoy this food is they can customize it to their liking. 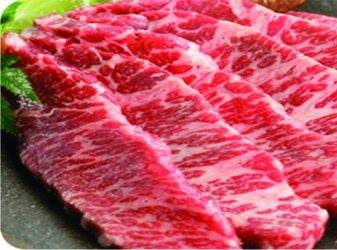 The ingredients (often, ribs or meats) are marinated in a sauce made primarily from soy sauce, garlic, and sugar. However, several variations on the marinade exist, including recipes that utilize sesame oil, rice wine or hot pepper paste. Fruit juice, lemon-lime soda and honey have become more common additions to Korean marinades in recent years, and is present in some incarnations of the dish.

When cooked on a griddle or grill, the meat is usually cut in thin slices across the bones. This style of cut, called L.A-GALBI, permits the marinade to pe*****te the meat faster. It also allows the meat to cook more quickly, creates a more tender cut, and makes it easier to eat the finished dish with chopsticks. The traditional cut is called WANG-GALBI, literally meaning King Ribs. In this version, the ribs are cut into 2 to 5 inch segments, and the meat is filleted in layers away from the bone to form a uniformly thin layer. WANG-GALBIi is usually what is served in traditional Korean restaurants, as the traditional cut is considered more genuine. Rarely, if ever, are L.A-GALBI served at top establishments. Pre-cut GALBI is available from many meat markets in Korea and elsewhere.

GALBI is generally served in restaurants known as 'GALBI HOUSE', and the meat is cooked right at customers' tables on grills set in the tables (usually by the customers themselves). It is typically served with lettuce, perilla, or other leafy vegetables used to wrap the meat, which is then dipped in ssamjang, a sauce made of fermented bean paste and red pepper paste. It is often accompanied by side dishes known as banchan.

"GALBI-TANG" is a clear soup containing pieces of GALBI.

"GALBI-CHIM" is short ribs braised in a sweet soy sauce based sauce.

Be the first to know and let us send you an email when Woodnymph Korean Restaurant posts news and promotions. Your email address will not be used for any other purpose, and you can unsubscribe at any time.

Other Korean Restaurants in Baguio City

Other Korean Restaurants in Baguio City (show all)